This weekend Victor and I spent the weekend in Puerto Rico with our friends (Maile and Jason).  It was exactly what I needed and I thought I’d share some vacation pictures.  I can assure you that I saw a lot of beautiful places worthy of pretty photos, but that’s not what I take pictures of and I think we all know that.

There were tons of wild horses all over the island (Vieques) we were staying at and they thought they owned the road so we’d get out and shoo them off the road.  Case in point:

This isn't blown up. This is the picture I was taking when I rolled down my window and a horse tried to eat my camera phone. Maile offered that maybe he wanted to check twitter.

The beaches were beautiful and (as with every tropical paradise) every once in awhile you’d stumble over something truly unexpected.

You can't see my other hand because it's missing.

The warning signs were confusing. 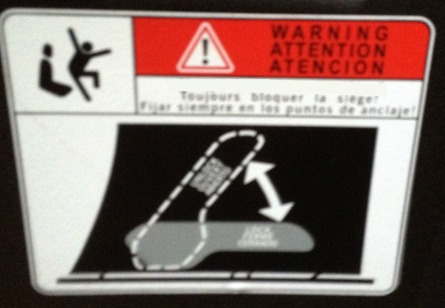 I think this one says Warning: You are in the Matrix. Gravity may stop working. Penises may go up and down.

We went to a restaurant that had a giant picture of an iguana lustily humping a bunch of green bananas.

One of these things is not a banana.

Then we went to a spa and the guys got a coconut scrub, which they complained was poorly named because their nuts were hardly scrubbed at all and their masseuse wasn’t even named Coco.  The massage failed to deliver on all promises made.  We were escorted out.  This was a continued theme of the vacation, and we scared people with our inappropriately loud laughter at every stop.  It was awesome and I so needed it.

I also made a special t-shirt for vacations.

You know when you're at the beach and you put on a shirt but then 10 minutes later you notice it looks like you peed yourself because your suit soaked through the bottom of your t-shirt? That's what this shirt is for. At first it just said "This is not pee" but then I realized that a lot of things are peeing in the ocean so it's more accurate to say it's not *your* pee. You are welcome.

Also, this is supposed to be a weekly review of shit that happened to me this week, except that not much happened because I flaked out on vacation.  BUT I did have two things happen.

This (half-assed) weekly review was brought to you by the full-assed people at Cafe Rio, who make sweet pork barbacoa quesadillas that you would sell your soul for.  Probably.  Depends on how much you like quesadillas, I guess.  Also, they’re in 10 States and counting so check them out and see if there’s one near you.

This entry was posted in Random Crap, weekly reruns. Bookmark the permalink.

162 replies. read them below or add one