in more than meets the eye

So, yeah.  This is a purposely disjointed post because it’s too heavy and triggering to stand alone so I’m going to add something light and (somewhat) lovely at the end.  For once, my disorganized posting is actually non-accidental.  This is cause for celebration, although the comment section might be incredibly confusing.

So here’s the first subject, and it’s not fun but it’s fucking important, so listen.

This week is Suicide Prevention Week.  I always appreciate that it comes in September because there’s something about September that wants to eat you.  I don’t know why.  I just know that depression lies and it lies the loudest and most convincingly in September.  That’s why today I’m reminding you that suicide hotlines are amazing and have saved me from self-harm on numerous occasions.  If you need someone to talk to, or if you’re someone who knows a person who needs help and you need advice on what to say or do, call.  That’s what they’re there for.

Also, because so many of us are online, this page about safety teams on social media sites can be crazy helpful.  (Not sure if there’s a non-American version of this.)

Here are some good numbers to have:

Also, To Write Love on Her Arms is doing a fabulous thing where they’re asking you to share why you can’t be replaced.  It’s a perfect reminder of why you’re important and it’s a bad-ass way to flip it around and tell other people why you think they can’t be replaced.  If you can’t think of anything to write on yours then ask your friends or family to fill it out for you.  You cannot be replaced.  Trust me on this one. 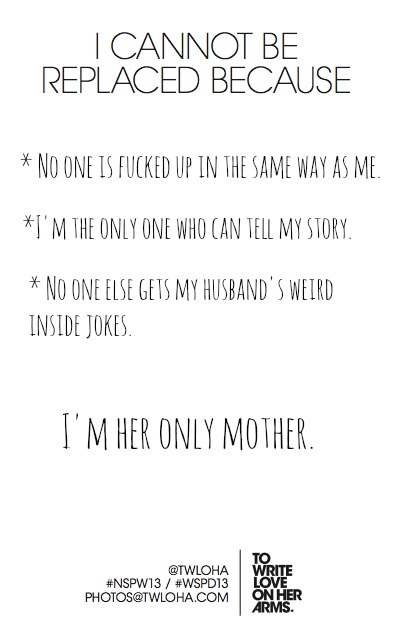 Okay.  That was a little dark, but sometimes you have to visit the dark to appreciate the light.  And now for the light…

This month Hailey turns 9 and I wanted to bring cupcakes to her class but there are some severely allergic kids in there and I don’t want to accidentally kill them.  Instead I was considering just bringing all the kids a book.  Around age 9 was when I realized that books were slightly better than cupcakes, so I think it might go over vaguely well but now I can’t pick a book.  I wanted to do Magic Trixie or Coraline, but I’m afraid there are some uber-religious kids in the class who might not be allowed to read anything magical (and that made my heart hurt just writing it) and so now I’m not sure what to get since almost all of the books that Hailey and I read are a bit dark or objectionable-in-the-best-possible-way.  What was your favorite book when you were 9?  Any recommendations? (Ideally under $10 and good for any gender.)  I’m leaning toward Hank the Cowdog but is that one of those books that everyone already owns by age 9?  Help.

Updated (9-16): Holy crap, you people have some amazing suggestions and I’ve started a whole reading list for Hailey just based on these comments.  In the end I took your suggestions to talk to the teacher about ordering from Scholastic and she was crazy helpful and I was able to get about 100 fantastic books to give out to the kids and to be used as an impromptu lending library.  They had Bunnicula for a dollar so I bought dozens of those and I plan on buying more and handing them out on Halloween for All Hallow’s Read.  Also, I’ve never read A Wrinkle in Time, but so many of you suggested it that I bought it on Saturday and Hailey and I are already halfway through it.  It is spectacular.  Thank you.

This entry was posted in more than meets the eye. Bookmark the permalink.