You can’t take me anywhere, part 2

in blogging about blogging again, functions I shouldn't be allowed to attend, I am totally overrated, no one thinks this is funny but me, Random Crap

If you missed part one of my Mom 2.0 Summit confession you should go there first.  Really.  This isn’t the kind of post you can just jump into.

So when we left off I’d just finished brandishing a broken wine bottle at someone in the Four Seasons bathroom while dressed in 1960’s attire and an enormous wig.  The usual.  I couldn’t go back into the bathroom because of all the shattered glass but it was kind of cool because some of the glass shards got embedded in my flats so when I walked it made a tap-shoe noise and it sounded totally classy.  That’s probably why most people threaten others with broken bottles rather than switchblades.  Switchblades don’t make your shoes sound pretty.  This is exactly what I had just said to my friend Laura, who was hosting the party and she shook her head in an vaguely disappointed sort of way (most likely at herself for ever leaving me alone) and she pulled me outside.  I assumed I was being escorted off the premises and it was a nice change to have a friend do it rather than security but then she said that I had to come watch a Volkswagen demo because they were the ones paying for the drinks and that’s when I found myself in the alley in the middle of downtown Houston changing a tire in a petticoat and wig.  And I was a terrible volunteer because I kept making penis jokes the whole time which I’m sure were picked up by the mic but it’s really not my fault because the girl running the demonstration was all “Have you ever had to jack something before?” “Be careful that you don’t lose a nut.” “I need some help getting this nut screwed.”  Honestly, it was like they were daring me to not say something.

It looks exactly like we're peeing and/or changing a tire. We're actually doing both. Just kidding. Probably. I can't really speak for Maggie. She's good at multi-tasking. She might be peeing.

It was  pretty much the most elegant party I’ve ever been to where I used a tire-iron for non-violent purposes.  It was pretty bad-ass.

Then the next morning I ran down to watch the opening Keynote address because I wanted to make sure that the Hints from Heloise chick didn’t say anything bad about “that girl in the elevator with all the porn” and I mentioned to the maid that I didn’t need my room cleaned because I had like a hundred copies of SexIs magazine on my bed and having 100 racy sex magazines in your room is bizarre enough, but if you have 100 copies of the exact same racy sex magazine then people think you’re a fucking psychopath and I didn’t want to have to explain.  So I go down and watched the keynote and it was fine but I really wanted to ask Heloise if she ever just wrote “Hey guys?  FUCKING BAKING SODA.  The end.  I’m taking the rest of the week off, bitches” but they ran out of time to ask questions and also Laura had threatened to duct tape my arms to the chair so that I couldn’t ask inappropriate questions so instead I just asked the question in my head.  The Heloise in my head didn’t know how to respond though.  That’s probably what would have happened in real life too.

Then I got back to my room and the maids looked at me strangely and then I found out that they had cleaned my room and had arranged all my adult magazines into very classy fans around the room.  Awesome.

That night, hundreds of people looked at naked pictures of me in an art gallery.  Sort of.

Does it count as "naked" even if you can't see my nipples? I say "yes" because it makes this story much more interesting.

Afterward I came back to my hotel room to find that the maids had turned down my bed and had read the note that I’d left on the stack of not-really-porn-magazines which read “Dear Housekeeping:  I swear I’m not a pervert.  I just got sent all these sex magazines as a gift because I’m actually in them.”  In retrospect, I probably could have phrased that better.

This is where I should stop writing because this post is too long but I’m going to keep going because I have insomnia.  I suggest you stop and come back to read the rest of this on Thursday.

Day 3:  Today is the day when I’m scheduled to speak and so I’m already on edge.  I left a note on my stack of not-porn saying “Dear housekeeping:  When I said I was ‘in these magazines’ I meant that I wrote an article featured in these magazines.  I’m a humor writer.  Not a nude model.”  Then I remembered that last night I’d been vaguely naked in pictures at the art gallery and I realized that I was an enormous hypocrite so I scratched out the note and changed it to “You know what?  You aren’t allowed to judge me“.  It felt good.

Then I met with my three other panelists who are all awesome, hysterical and very, very Mormon.  I was a little nervous about this but they suggested we rename the panel “Three Mormons and a Bloggess” and then I knew it was all going to be fine.  Then they showed me how to throw their Mormon gang signs.  I made a slight alteration to mine:

Then as we were on stage they asked if we should do a prayer and normally this is when I’d be running away but they were so cool that I was all “HELL YES WE SHOULD DO A PRAYER” which is probably inappropriate wording but the spirit was there and so we huddled up but none of them wanted to lead the prayer so I was all “Dear God: Please let this panel be bad-ass and…um…I dunno…don’t let any babies fall down any wells?” and they all kind of looked at me and then said “Huh.  Okay then.  Amen.”  Because how are you not going to say “amen” to a prayer for babies to not fall down wells?  You can’t. It’s like a totally fail-proof prayer.

Then the Mayor of Martindale Texas presented me with a crown, scepter and an official proclamation of my Czarness signed by the cat that runs City Hall.  It’s moments like this that make me wonder if I’m actually in a coma and am just dreaming this.

This easily made the top 10 moments of my life and I may have teared up a little.   Stop judging me.

Then apparently God heard me talking about babies because suddenly there was a baby crawling up the stage at me.  True story.  Middle of the panel: Baby. 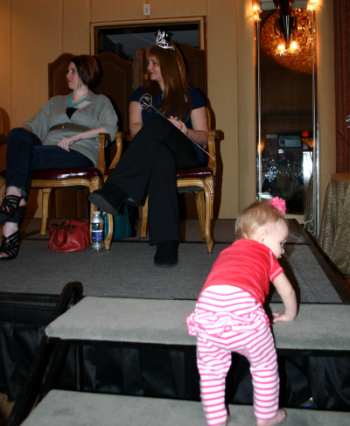 Baby. Possibly looking for a well to fall in just to fuck with me. Note that we're all oblivious to the fact that a baby is crawling up toward us. Probably because it's so rare that babies attack you on stage.

It was like when people get attacked by zombies and everyone else sees it coming except the people who are about to get attacked except that instead of a zombie it was a baby.  And the baby just kept on coming closer and I finally noticed it and I was all “The hell?” because it’s a cute baby but this is my spotlight, so just back off baby.  You know nothing of my work.  And my first instinct was to kind of gently nudge her away with my foot like you do to a puppy but that seemed wrong somehow so I just stared at it and wondered if the Mormons were seeing this.

The baby was uninvited but adorable. It totally had show-quality.

But then I realized that the Mayor was still sitting in the audience and I thought that maybe this was some sort of test to see if I’d really make a good Czar so I grabbed the baby before she could fall off the edge of the stage and just kept going with the panel.  So yeah, I *am* like some kind of hero.  But then it turns out that the baby wasn’t even aiming toward the edge of the stage and was really just there to try to steal my crown.  As if, baby.

"You can touch the scepter though. Because I am a generous dictator."

So yeah, I totally passed the baby test. I am the best Czar ever.

The end, I think.

PS.  I apologize for this whole post.  Honestly, it confuses me too and I freaking lived it.

Comment of the day: “Everybody knows that czars are supposed to kill babies. Way to fail.   Wait. No. They’re supposed to kiss babies. So you’re closer on that one.” ~ Stimey

This entry was posted in blogging about blogging again, functions I shouldn't be allowed to attend, I am totally overrated, no one thinks this is funny but me, Random Crap. Bookmark the permalink.

199 replies. read them below or add one